A large part of life is what I classify under the heading “tides and seasons”. Tides come in and ebb out in a regular pattern. Seasons come and seasons go. There is a relentless repetitiveness about day following day. There was a haunting chorus in the John Lennon song Across the Universe : “Nothing’s gonna change my world” that has resonated in my life from time to time. So two questions to start this new stage of life that I find myself in having given up paid employment. Firstly “Is there anything that can change my life?” And secondly :”Have I the courage to try and do something about it?”

But let’s cut to the chase. If it’s possible to be disappointed with a 9 minute personal best then that is how I feel about the race. I went into the race more confident than I have ever been for a run. My training had gone superbly; my fitness and strength felt good; I had a clear plan and objective which would see me complete the run under 3 hours 30 minutes. 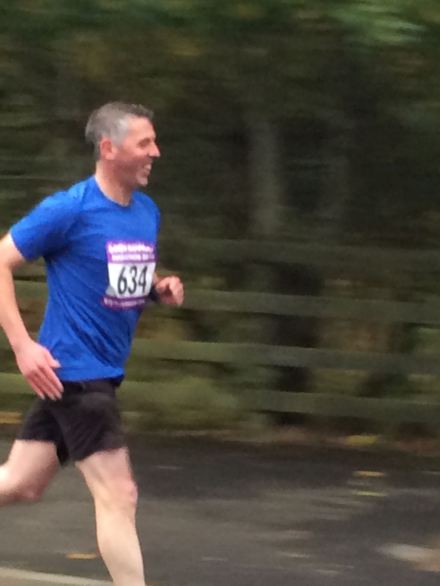 My other issue was that the three gels which I had put in the pocket of my shorts had fallen out in the first mile and I had nothing to sustain me other than jelly babies. This was another reason to slow down but again I was stupid.

I completed the half marathon in 1 hour 38 minutes – ridiculously fast. Even at that point I knew I was in trouble. The loop to the half-way point took us uphill and my legs started objecting. After we turned there was another sustained hill which was a real struggle. Mile 14 took 7:52; mile 15 : 8:16. There was a slight recovery in miles 16 and 17 where in a flattish part I recorded 8:03 and 8:02. But I knew even then with 9 miles to go that I was in deep trouble. My right calf was making it’s presence felt; my cadence had dropped; my breathing was laboured; the promised water stations weren’t there and I was getting sick of the jelly babies. I tried every positive strategy I could think of but nothing was working. From there to the finishing line was, to be honest with you, pretty hellish.

To be out of energy with 8 or 9 miles still to go is a horrible feeling. A voice in my head kept saying : “Stop! Give up! You’ve had it!” But I kept putting one foot in front of the other. More than anything I was annoyed with myself for bringing this situation on. Giving up is never a serious option for me. I determined that one way or another I would get across the finishing line. Mile 18 : 8:20; 19: 8:35. After mile 19 I tried to take stock. Physically I was ready to stop. Due to my fast start a decent time was still possible. But my sub 3:30 minutes dream died at that point. I realised how spent I was. I reassessed possibilities. For the first time in my running career I acknowledged that I would allow myself to walk the uphills. I mentally adjusted my target time to sub 3:35. Just then a water station appeared. I stopped and to celebrate downed an entire bottle in seconds. Next mile 9:05. From then on I walked the hills. I now knew what people mean by the expression “hitting the wall”. In great pain and exhaustion I kept going as best I could. Mile 21:8:49; 22:9:05; 23:10.03!; 24:9:37. In the midst of the darkness there were shafts of light. The runners who were passing me gave amazing support and encouragement. Some asked if I was okay; most shouted encouragement  and support. It was fantastic and although I was too exhausted to thank them at the time I unreservedly do so here for helping me keep going. Mile 25:10:12 and mile 26:9:52. Here I am near the end – literally and metaphorically.

Even the last 400 metres seemed to take forever. I was keeping to the time required for a sub 3:35 finish – but only just. As I turned for the final finish I turned left too soon. Someone shouted to me to alert me. I tried to change direction but my legs went from me and I fell flat on my face. Somehow I got to my feet and staggered over the finish line. For around 10 minutes I felt a bit ropey but several mugs of tea revived me and I gradually recovered. My time was 3 hours 34 minutes and 39 seconds. But it was a badly run race and I only have myself to blame!

Well I completed the Loch Rannoch Marathon despite moments when I thought I wouldn’t. I have my official time which was 3 hours 34 minutes and 39 seconds. I was 59th out of 189 runners and second in my age category (V60) Several things went wrong which I will detail in my race report but at the end of the day it was a pb by 9 minutes 2 seconds so I’m happy about that. Here I am after the finish feeling revived after three mugs of tea! 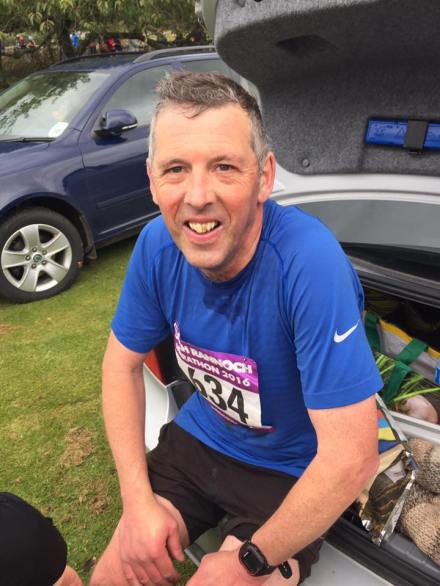 I’m really looking forward to my second marathon this Sunday. My training has gone spectacularly well. No injuries, good runs, excellent times (for me!) and I feel that in terms of strength, fitness and weight I’m pretty much exactly where I want to be.

This isn’t Loch Rannoch but it serves as a reminder of how great it will be to run surrounded by beautiful Scottish scenery. I’m aiming to run a personal best – my time in the first marathon I ran was 3 hours 43 minutes 41 seconds so that’s the first target.

The forecast for Sunday isn’t too bad. Cool with a very light breeze would be ideal!

Less than 4 weeks until the Loch Rannoch Marathon! Training has been going remarkably well and I’ve been injury-free which is a big plus. I’ve done one of my 20 mile runs and have one left on Sunday. After that the taper starts and the distance reduces as the big day approaches. I’ve been running lots of hills like this brute.

Not much in life comes easily. And if you want to run a marathon you have to do the training. I’m just back from a two week cruise which was wonderful in terms of a holiday and life experience but perhaps not the easiest means of continuing marathon training. The boat was too small to run on; it wasn’t safe to run when we berthed because I was scared I would drop keys, security passes etc and the only real option in the small gym on board was a treadmill. I know some people like treadmills but I’m not one of them. I did my best but at best my training stalled for two weeks and at worst it regressed a little. I’ve done two runs since coming back and they weren’t good in terms of pace and heartbeat. The big test will be the long run tomorrow which ramps up to 18 miles.

However to finish on the positive side I didn’t put as much weight on as I feared. I’m still completely injury free. I have two months left to get to where I want to be on the starting line. My only worries are about my finish time and not whether I can complete it.

Week 4 of marathon training didn’t go so well. I had three runs and in each one I struggled with pace, time, heart-rate and energy levels. When runs don’t go so well you frantically go through in your mind the possible reasons. These include the weather conditions : heat, wind, wet surfaces etc then your own condition. Is there a fitness problem; is there an injury or the start of one; are you eating the right foods; are you over-training or increasing your distance too quickly? Are your running shoes needing replaced; are you worrying about something which is affecting your running; are you thinking negative thoughts or have you generally lost confidence? And there are a number of other possibilities!

After more than a little thought, I’m unsure what the problem is but I refuse to worry about it. It’s only week 4 of 18 and I’m fairly sure it’s nothing physical. On the positive side I’m on page 2 (of 4) of my training schedule and my long run at the start of week 5 was 10 miles and it was a much better run. Where running is concerned there’s a lot of truth in the saying : “You can if you think you can.”

Another week of training ticked off successfully. October 16 is still so far away that I refuse to get too stressed. My worst run this week was the 40 minute tempo run on Monday where I found it hard from start to finish. My long run moves up to 9 miles tomorrow. A cool dry morning would be perfect. I plan to run off-road as much as possible for the nine miles.

Well there’s a title I never expected to be writing again.

I don’t normally enthuse about anything but I’ve had a great time since entering the Loch Rannoch Marathon. It just feels so right to be working towards something big but achievable. Better still the doctor has cleared me to run. She asked a few questions and then took my blood pressure. It shows how much I want to do this that before she tested it I told her that my blood pressure is always considerably higher when I visit the doctor due to “white coat syndrome.” In the event the pressure was fine, almost normal in fact.

And I’ve had an early birthday present of two very important helpers :

It’s a rubbish photo but it is in fact a Garmin Forerunner and a heart rate monitor. Don’t ask how they work but they tell you everything you need to know when running about time, distance, pace, cadence(strides per minute), heart rate, elevation gain and so on. After the run it produces reports which geeks like me can pour over for hours : 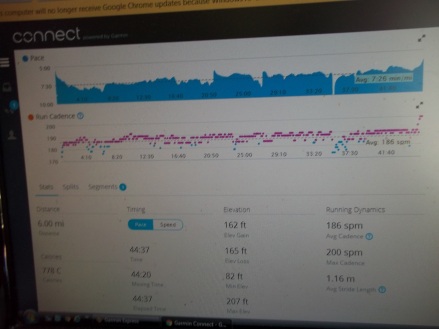 Because I’ve been running regularly all year my basic fitness levels aren’t too bad and as a result the first week of training has been pretty straightforward. It will get harder though!

It won’t be a great surprise for you to learn that I’ve entered the Loch Rannoch Marathon on October 16. It’s a flattish race running round the loch on quiet roads with lovely scenery.

There are three hurdles to jump before I line up on 16 October.

Firstly I have to get medical approval. I’ve made an appointment for 22 June.

Secondly I have to carry out the required training without getting injured. I’ve started an 18 week training schedule today.

Thirdly I somehow have to overcome the fact that I’ll be on a boat for two weeks in the middle of the training with extremely limited opportunity to exercise!

All that being said I think it’s possible and I certainly look forward to the challenge. I’ll try and post an update once a week.